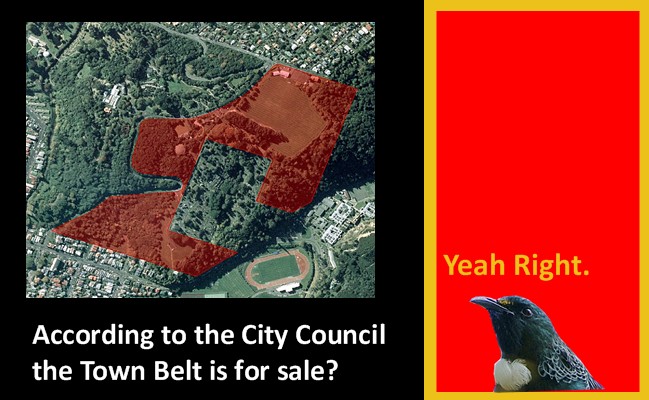 The Dunedin City Council announced on the 19th of September its intention to consider selling 149 parcels of land across the city for a potential return of $10 million dollars.The sale of a variety of city properties has probably not come as news to Dunedin residents as the city struggles to find ways to meet debt repayments. However, analysing the list of properties that the City Council is considering for sale makes for sobering reading. What is clear from the proposal is the possibility of shedding undeveloped recreational open space, playgrounds and esplanade strips which are designed for accessibility and conservation of waterways. One site in particular that provides essential access to waterways and the wider track areas of Ross Creek falls into this category. So, the sale of such properties deserves closer examination of the public use of such land assets for suburban and rural community’s alike.

For an organisation like the Society it raises questions of the value placed on improvements undertaken by community groups and whether that investment will be returned for redistribution to other projects after any potential sale. In one example the Society have invested significant time and capital planting an area proposed for sale which the Council and community have benefited from. It could be argued that the land value has been increased and if it is sold does the value of those improvements get appraised and returned to the Society or the community? Many community organisations who make contributions in a variety of ways to public lands may have similar views and it may make organisations less enthusiastic to make such contributions in the future.

One of the other disturbing aspects of the sale proposals is the loss of open and play spaces, particularly local playgrounds who’s use often fluctuates due to generational change in community’s. Rationalisation of public property today, can mean diminished public areas that are needed in the future. Once again the question has to be asked in lieu of the Council’s playground upgrade programme whether sale proceeds of playgrounds will be reinvested into the community’s strapped for facilities and amenities. This is particularly relevant to these sites, as many are ones that have not been invested in or developed by local authorities over the years. Many of the parcels also appear to be older reserve contributions created as part of subdivision and this should stimulate further discussion on how this process is undertaken and under what criteria, so that the land is economically and socially viable at the time of development.

Highlighted on the list of potential sale properties was 76 Lovelock Avenue and a search of the City Council’s land map shows that this is a substantial portion of the Dunedin Town Belt. The land includes Opoho Park, Lovelock Bush and Bracken’s View. Now it would be easy to get hot and bothered and jump up and down at the notion that part of Dunedin’s oldest reserves was to be flogged off to the highest bidder, but it surely has to be either a clerical error or a practical joke in very poor taste. Needless to say the Society will be keeping a firm eye on this process, particularly the rational of the selection process and the methodology of consultation with the community. As for the sale of the Town Belt, well it’s probably best to take that with a grain of salt and quote a well-known beer commercial, as its doubtful the City Council are that brave.