The Dunedin City Council is presently undertaking a review of the District Plan  and that review will mean that the Dunedin Amenities Society will also be looking at the implications of those changes. The review includes looking at creating a new open space, reserves and recreation zone which would “reflect the different types of open space and recreation areas.” The current District Plan does not recognise reserve, conservation or recreation areas as distinct entities, but rather classifies them within the zone of the surrounding land. The problem with that approach is that the activities and land use that is associated with reserve, conservation or recreation sites is often quite distinct to the surrounding land use zones. Reserve sites such as the Town Belt are often over-arched with a wider zone classification such as the “Urban Landscape Conservation Area.” Thus the rules of the District Plan override the legal protection status of the reserve under the Reserves Act 1977 without fully understanding the nature of the reserve or its values. This creates inherent problems for reserves like the  Town Belt when dealing with very real conservation management issues.

In one example the current District Plan actually hampers the ability of the Council to manage areas of high conservation significance. The rules (13.8.2) associated with the management of bush within Urban Landscape Conservation Areas have inadvertently protected the highly invasive Sycamore (Acer pseudoplatanus). Vegetation removal in these zones is a discretionary activity, which is infinitely sensible as it protects flora and fauna on private land. However, under the District Plan the rule “does not apply where the plants to be removed are listed in any Regional Pest Plant Management Strategy applying to the district of Dunedin City.” Here lies the conservation conundrum because sycamore is not included in the Otago Regional Council’s Pest Plant Management Strategy (that’s a whole other post at a later time). Which means that under the current Urban Landscape Conservation Area rules sycamore becomes classified as “bush” and the removal of individual mature seed bearing sycamore cannot be undertaken without resource consent.

For urban reserve sites like the Town Belt sycamore has serious ecological implications for the long-term health of the reserve. The most recent ecological assessment undertaken for the Town Belt stated that sycamore was a “most widespread and serious weed” that is able to “almost completely exclude other plants from the canopy, understory, and ground layer vegetation.”  The Dunedin Town Belt Management Plan is approved by the Minister of Conservation and is a publicly consulted document of management intent which includes weed control and particularly the removal of Sycamore from the reserve. It categorically states “weed control is the management issue of prime importance if the ecological values of the Town Belt are to be sustained. Regeneration of locally native canopy tree species is being inhibited across wide areas of the Town Belt. Without effective weed control, the medium to long-term outcome will be collapse of the native forest canopy. By undertaking a public management plan process under the Reserves Act 1977 the City Council has with the approval of the Minister of Conservation (granted in 2007) indicated rightly its intention to remove sycamore from the Town Belt. There is no rational or legal argument to impose restrictions on its removal from the reserve under the provisions of the District Plan through its own muddled rules.

It is quite clear to the Society in reading the current District Plan rules for Urban Landscape Conservation Areas that planners have not looked at the adverse effects of the rules in relation to the ecology of the Town Belt or other city reserves. In fact the rules actually create adverse ecological effects in relation to the removal of sycamore from reserves that fall within the Urban Landscape Conservation Areas . This is contrary to section 76(3) of the Resource Management Act 1991 which states “in making a rule, the territorial authority shall have regard to the actual or potential effect on the environment of activities including, in particular, any adverse effect.” What is also concerning is the lack of regard for the legal status of the Reserves Act 1977  and the Dunedin Town Belt Management Plan. Indeed the provisions of the Reserves Act 1977 is never mentioned in the current District Plan. Which shows that the current district Plan does not “have regard to any— management plans and strategies prepared under other Acts”  as it should under 74(b) of the Resource Management Act 1991. The question that the Society asks in this example is where was the synchronised and collegiate thinking in relation to the Town Belt and other reserves during their constant ecological struggles for survival from advancing invasion of pest plants like sycamore? Another thing to consider is how do these rules effect private landowners seeking to improve biodiversity on private property?

Dunedin’s Town Belt is one of New Zealand’s oldest reserve sites that forms part of the historical and landscape fabric of the city since its first survey in 1848. The importance of the reserve in that historical landscape context makes it not only a pivotal conservation and recreation reserve but a heritage site of regional and national significance. However, the undue pressure being placed upon its fragile ecology by rules that do not complement its management are likely to seriously impede its long-term health and values. The Society can only hope that this new District Plan review will undertake to give life and regard to the legal mechanisms that are already in place for the betterment and protection of Dunedin’s reserve riches. Let’s hope that bureaucracy does not get in the way of real ecological management. 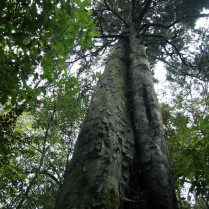 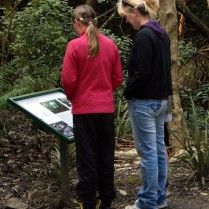 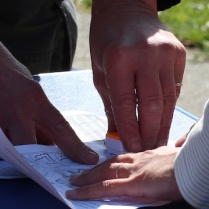 Getting a stamp on the traverse 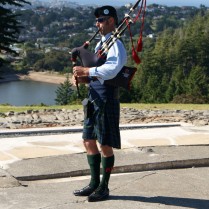 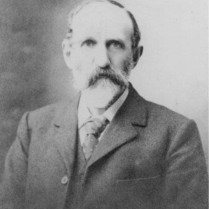 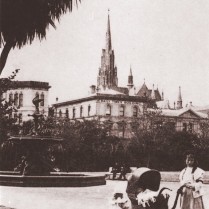 Students watching how its done 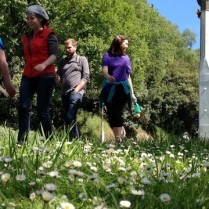 Walkers in the sun

The Town Belt is for all ages 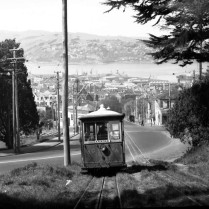 Tram running into the Town Belt 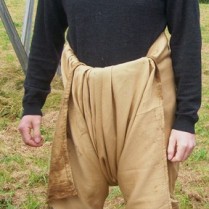 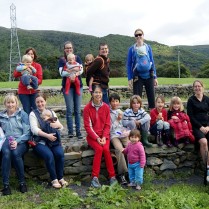 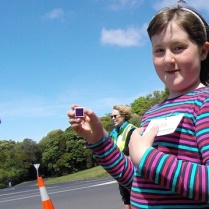