Contractors from Asplundh removed several trees from the old building ruin on the walking track at Craigieburn Reserve this morning. The trees were growing through the stone walls of the earliest building on the historic site and needed removing to allow for much-needed preservation works to begin. While it was sad to see the removal of these specimens from the site it is critical for the long-term preservation and care of this fascinating area of colonial settlement. The large broadleaf (Griselinia littoralis) growing out of the corner of the building was in very poor condition with the central stem showing considerable decay. The kanuka (Kunzea ericoides) was also removed as it grew out of the substructure of the eastern wall.  Under the supervision of project manager Paul Pope and archaeologist Dr Jill Hamel the Asplundh team completed the work in around two hours. A small digger will be brought in tomorrow morning to remove several stumps gently out of the stone walls including the remains of the broadleaf. The cut vegetation and slash from the removals will be dispersed into the bush to rot into the forest floor and create invertebrate habitats. Once the vegetation work is completed the stone mason will be able to begin the arduous task of reassembling and stabilising the ruin. 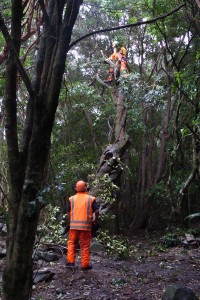